"Hijikata: The Revolt of the Body" Stephen Barber 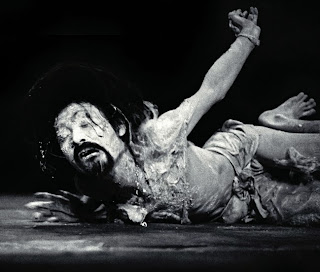 I have recently become acquainted with a young Taiwanese butoh dancer, and I read this book to learn more about his art.

Butoh was started by the dancer Hijikata in the ruins of a bombed out Tokyo in the years immediately after WW2, although it only really came to prominence in the uneasy years of the 60’s when Tokyo was hit by student protests against Japan’s continued domination by American consumerism and militarism. As such, it is borne of death and carries the smell of revolt.

Hijikata speaks of his ideal audience as being composed of the dead, and his gestures arise from the gestures of the dying.

I would like to have a person who has already died, die over and over inside my body…I may not know death, but it knows me.

Butoh is paradox, because it aims to negate all the usual gestures of the body and all the usual parameters of dance and performance. It is a kind of anti dance, an anti performance because each performance was only given once, and Hijikata allowed very few records to be made of the performances. The first ever ‘performance’ of butoh was conducted in private with no audience. Butoh is as much meditation as dance.

This sounds like the most extreme kind of artistic masturbation, and in many ways it is. Butoh in its early days had strong links with the sex cabarets of Tokyo, and Hijikata and his collaboraters were regular performers in the porn movies and sex clubs of the Shinjuko district, largely as a means for financing his other butoh activities. One has to admire the total commitment with which Hijikata conducted his life long project to give birth to a new kind of dance; in a way his whole life was a kind of butoh performance, a revolt. Although Barber doesn’t make the comparison, I think of Andy Warhol, Hijikata’s contemporary, who epitomised the disposability and distraction of modern consumerist culture and its ghastly superficiality, while Hijikata rejected this and stood for something completely opposite: a commitment to intense concentration and total immersion. Like Warhol in his Studio surrounded by armies of assistants and hangers-on, Hijikata set up a dance studio in an old asbestos factory where he trained young dancers in the ideas and gestures of butoh. He withdrew into isolation into this Asbestos Hall just as butoh was beginning to attract attention, and rarely left it again for the last 12 years of his life.

Barber’s book gives a detailed account of the life of Hijikata, his influences (Mishima, Artaud, Genet and Lautreamont) and the various schisms that eventually took place within the world of butoh. For example, Kazuo Ohno, the other major butoh dancer of the period,  Hijikata’s student and eventual butoh master in his own right, regarded butoh as something impossible for Westerners to understand, while Hijikata held that anyone could do butoh because butoh is about death, and everyone dies. Anywhere there is culture in revolt or death, there butoh is possible.

Likewise, Hijikata rehearsed for hours and meticulously choreographed each gesture, allowing no place in his work for improvisation, while Ohno had a much freeer attitude towards improvisation. The only improvised performance Hijikata ever gave was right at the very moment of his death, when he assembled the fingers of both hands and formed the outline of a ball of paper within the empty space between those fingers, rolled the ball on his chest, and then wedged it delicately under his cheek. Barber movingly calls this improvisation Hijikata’s last gift to his friend and collaborator Ohno.

Barber is also very good in the collaboration of Hijikata and the various photographers and experimental film makers he worked with. There are very few surviving films of Hijikata’s performances, as he rejected the kind of narrative or documentary linear representation a filming of a performance would necessarily involve. Butoh is not a representation of something, but a thing in itself; it negates representation, linearity.

At a butoh performance and workshop I attended in Taipei, the only entirely filmed performance of one of Hijikata’s works was screened, and the power and strength of butoh was reinforced by the flickering, disjointed images of hand held16mm. Filmed in the later half of the 20th century, the images and gestures looked infinitely older, atavistic, ur, like cave drawings come to life, something from the very dawn of human culture, but at the same time something suggestive of the total future death of that culture.

Hijikata’s last project involved a return to the deep north with the photographer Eikoh Hosoe, who captured images of Hijikata performing butoh amidst the rice paddies of the region, to an audience of hills, lowering clouds and birds. 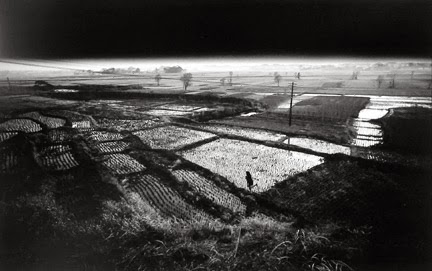