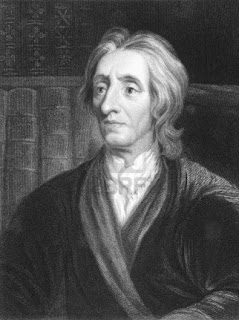 Locke’s metaphor of the human mind as a white paper on which characters are gradually inscribed, is well known. But in Book 2 of the Essay Concerning Human Understanding he uses two other metaphors to describe the mind. The first of these describes the mind as a dark room with small apertures in the wall to let in light and air from outside; the second is of a big chest of drawers stuffed full of ideas.

Having demolished the Cartesian notion that the mind brings with it innate ideas, Locke in Book 2 addresses the origin of ideas, and examines how ideas are formed in the mind if they are not innate. In Book 4 he stresses that the mind is a self-contained entity, with no knowledge of anything beyond itself: All our knowledge consisting as I have said in the view the mind has of its own ideas, which is the utmost light and greatest certainty we, with our faculties, and in our way of knowledge, are capable of... 4.2.1  but all knowledge is based on simple ideas which arise in the mind, somehow, as the result of the entry of sense data. This appears to be contradictory. On the one hand the mind has no knowledge of anything other than itself and its own ideas, on the other, those ideas come from somewhere outside the mind, and have reference to things that lie outside the mind. How does Locke address this?

He is uncharacteristically imprecise. The organs of the senses act as ‘conduits’ conveying data? information? substance?  into the mind: External objects convey into the mind what produces there these perceptions 2.1.3 The best he can give us is what produces there perceptions, but he refrains from saying exactly what that what is. Later he says Whatsoever is so constituted in nature as to be able by effecting our senses to cause any perception in the mind, doth thereby produce in the understanding a simple idea; 2.8.1, which is not much better: something there is in nature which effects our senses causing a perception in the mind. Wherever there is sense of perception there some idea is actually produced and present in the understanding 2.9.4  but he doesn’t say exactly how the idea is produced. Later he says: The actual entrance of any idea into the understanding by the senses 2.19.1, which seems to imply that the idea comes into the mind from outside, which contradicts what he himself says later in Book 4, where he posits and stresses an absolute division between the mind and the external world.

All our knowledge consisting as I have said in the view the mind has of its own ideas, which is the utmost light and greatest certainty we, with our faculties, and in our way of knowledge, are capable of... 4.2.1

Locke has here put his finger on the matter-spirit problem, or in other words, the interaction between sense data conveyed to physical organs by means of physical substance: lightwaves, soundwaves, pheromones and so on; and ideas, perceptions, the activity of the mind separate from the activity of the brain and nervous system. The best he can tell us that there is an interaction between the two at some point, and that as a result of this interaction, ideas are formed in the mind.

This mysterious something that unites matter and spirit is substance, the underpinning of whatever is.

Locke begins his discussion of substance by quoting the Hindu legend that the world stands on the back of an elephant, standing on the back of a turtle, the turtle standing on…something that underpins it. We are not capable, with our current organs of perception and understanding, of arriving at a clearer conception of substance, than that it is something which underpins everything else, both in the world of matter, and in the world of spirit.

Thus, a snowball contains within itself bulk, mass, extension, figure and number, independently of whether we perceive it or not; while its secondary qualities of coldness, whiteness, moisture, the ability to cause pain are secondary qualities that arise only as a result of our perception of the snowball and do not reside in the thing itself. Here Locke brings in the notion of a power: substance is that which has the power to effect change, change in matter, and change in ideas. There are two kinds of powers: active power, to change something, and passive power, to be changed. Thus, gold contains a substance which has the power to cause (active change) the idea of yellowness in us. To speak truly, yellowness is not actually in gold, but it is a power in gold to produce that idea in us by our eyes, when placed in a due light, 2.23.10.

Substance permeates the physical world, but it also forms the basis of our thoughts. Complex ideas consist of simple ideas united and subsisting together in …. something which unites them. This spiritual substance, Locke, intimates, must be separate from the actual perception of thinking; related to the thing-doing-the-thinking rather than the thinking itself: Whilst I know by seeing or hearing, that there is some corporeal being, I do more certainly know that there is some spiritual being within me that sees and hears. 2.23.15. We know that there is something doing the perceiving (of course, otherwise perception could not take place) but we do not know what that something is. For Locke, that something is substance: If anyone says he knows not what it is that thinks in him, he means he knows not what the substance is of that thinking thing 2.23.23

Thus, matter and spirit are supported by substance, but we are not capable of further understanding of the exact nature of this substance: which support we denote by the name substance, though it be certain we have no clear or distinct idea of that thing we suppose a support. 2.23.4 Perceptions of objects are conveyed into the mind by some mysterious all-permeating substance, and somehow converted there into images of the object that caused those perceptions.

Wherever there is sense of perception there some idea is actually produced and present in the understanding 2.9.4 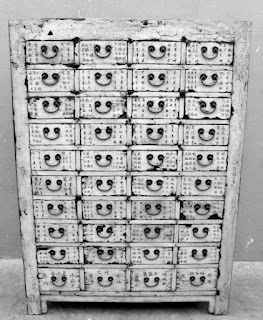 2. The Mind as a Chest of Drawers

I imagine this is as one of those Chinese cabinets with hundreds of little drawers stuffed full of scraps of paper. The biggest problem with such a receptacle is the organization of its contents for easy retrieval, and here Locke lays out one of his great taxonomic systems, categorizing the ideas in our minds.

These are the qualities of simple ideas:

Here are some examples of simple ideas arising from Sensation:
Solidity, Space,

Modes:
These are the qualities of those ideas called Modes:
·      Modes do not exist by themselves, but are dependent on other ideas
·      There are two kinds of modes: simple modes and mixed modes
·      Simple modes are the modifications of simple ideas already discussed. Thus contemplation is a simple mode of the simple idea of retention.
·      Mixed modes do not exist in reality, but are put together completely by the mind.
·      The constituent parts of mixed modes are held together by a term, which refers to the idea of the mixed mode: freeze

Here are some examples of mixed modes:
Creation, annihilation, actions such as dueling or murder, frugality, virtue, glory, gratitude

Relations:
These are the qualities of those ideas called Relations:
·      All things are capable of an infinite number of relations, depending on the number of things being related.
·      Ideas of relations are different from the ideas of the things themselves and not contained within them.
·      Our ideas about the relations between things may be clearer than our ideas of the substances of those things.
·      Changes in relations can be made without changes in the things themselves.