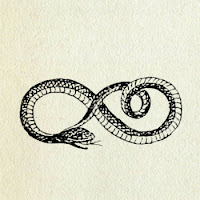 I know the author of this book. He is a scholar of the first order and a gentleman.
[The cobra] remained utterly still, glaring into my eyes. I say glaring, but in truth it was something different, a stare grounded in knowledge, patience, murderous capacity, and worst, an unmistakable, uncanny familiarity.
Alcoholism, suicide, depression, sudden, piercing, guilt ridden love for a young son and his little sister: in one form or another these are the serpents ready to strike at any time, disturbing the perilous equanimity of life.
Harsch's book eschews easy categorisation: it's not a novel, neither a memoire, a diary, a confession, a travelogue, a meditation on the vagaries and cruelties of history, a compendium on snakes and oniophology; it is not a treatise on the position of the Other in an alien culture; not an anthropological collection of snake lore from the south Indian state of Tamil Nadu, neither an anthology of juicy bits from the Mahabharata and other Hindu tales; it's all of these. And more.
The book coils like a snake, starting with a prologue set in the author's home in Izola overlooking the Adriatic, in the heart of Europe; it snakes through a trip to  South India with his wife and children, where the narrator's Indian family live; it loops back and forth between these two settings. Along the way, wherever he is, the narrator engages in an obsessive pursuit of snakes, or other cold blooded creatures if no snakes are available. Like mad Captain Ahab in Moby Dick, narrator and narrative are in pursuit of the dreaded cobra, deadliest of snakes. Along with him on these exploits, he drags his not unwilling son, and often the boy's little sister. He keeps those animals he catches on the balcony, where he drinks, writes and engages in banter and word games with his children, and monologues with the reader.
The trip to India is the main part of the narrative, and for this reader the best part of the book. It contains to my mind the best writing. Harsch weaves a seductive net of lush descriptions of the teeming Chennai streets, scenes of family life with his Indian wife, her family, their friends and acquaintances, his children. The characters are splendidly well drawn, life-like and memorable. Like the narrator, and his family (and my colleague slick), I am still wondering what happened to Gopta, the maniac taxi driver. The children are especially lovely; Harsch avoids depicting them as mawkish pint- sized adults, which is often how children are written, and presents them as beings true to themselves.
The real skill lies in the way the discourse sustains two views. In the first of these, the (1st person) narrator seems blind to the dangers inherent in many of the things he does, and many of the things he puts his children through in the mad pursuit of knowledge of snakes, and in his quest for the cobra. He is obsessed with his snakes, his inner life, his alcoholism and occasional mad suicidal tendencies to the extent that he cannot perceive clearly what is going on around him. The narrator is one of those creatures of the foregrounded consciousness, of whom De Maupassant wrote: I possess that second sight which is both the strength and the bane of the writer. I write because I understand and suffer from everything that exists, because I know it all too well and above all, can see it all mirrored inside my mind yet am unable to participate in it.
In the second view, the narration manages to convey the real situation to the reader, past or through the obsessions of the narrator. This creates a marvellous tension for the reader, who is often on the edge of his seat worrying about the children while 'Rick' drags them off with him on one of his mad escapades.
Masterfully highlighting this double view is the symbolic presence in the text of the Hindu proverb of the rope which turns out to be a snake, which turns out be a rope. Is the reader worried because the narrator really is blind to the dangers he puts himself into; or is it that, because the reader is a layman concerning snakes, he has an unnecessarily and unwarranted, over-exaggerated view of the dangers? Are we seeing a rope or a snake?
This symbol also serves to link the themes of displacement: the narrator is an American man with an Indian wife living in Slovenia, but whose spiritual home is India. The book addresses the relationship between Europe and America, and between the West and India on a personal level through the narrative, and on a wider, deeper level through the inclusion of texts exploring Indian history, culture and Hindu philosophy, and anecdotes from the Other culture. One of the overriding concerns of the book is displacement.
The text is profound and witty. The writing manages to be powerfully emotional on the personal level of a man with his life; and angry and impassioned when describing the historical injustices perpetrated on the meek everywhere. It contains a number of very satisfying rants on all manner of things, and an even greater number of very funny jokes.
Posted by Murr at 11:29 AM