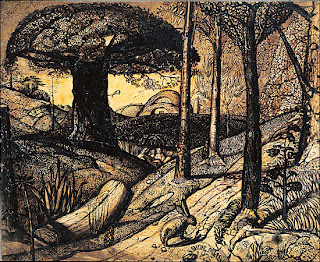 He had come more and more to regard 'reality' as a mere name given to the most lasting and most vivid among all the various impressions of life which each individual experiences. ... One of his own most permanent impressions had always been of the nature of an extreme dualism in which every living thing was compelled to take part.

This book operates on two distinct levels. The first level is a Lawrentian story of adultery and cuckoldry in a small English country town. Wolf Solent arrives in the town where he was born, after an absence of many years, to take up the post of secretary to the local squire. He falls in love with and marries Gerda, the daughter of the local stonemason. At the same time, he develops an ineluctable passion for the daughter of the local bookseller, Christie. His young wife is carrying on an affair with her childhood sweetheart, while Christie is fighting off the incestuous advances of her own father. Meanwhile, the squire is feuding with the vicar, and both are feuding with the local poet. There is lots of social observation, village fetes, afternoon tea, walks down leafy lanes, and a wealth of eccentric and eccentrically named characters. The novel is focalised through the eponymous protagonist, a highly educated, morbidly sensitive young man, the possessor of a 'mythology', and the story is largely about how he loses this personal mythology and becomes socialised in the world, a Dostoevskyan tale of how a young ego grows up and comes to terms with the disillusionment consequent on greater maturity and experience.

The second level, however, is really about something much deeper: man's relationship to nature, and the tension between human culture and society, and the natural world and its cyclical processes. On his journey to his hometown, Solent reflects on religion: ...It seemed as though all the religions in the world were nothing but so many creaking and splashing barges, whereon the souls of men ferried themselves over those lakes of primal silence, disturbing the swaying water-plants that grew there and driving away shy water fowl. Here, human culture, symbolised by religion, symbolised by creaking barges, floats on top of the primal lake of nature, barely disturbing it, but leaving no real lasting impact or impression. The book is really about the age old tension between nomos (society) and physis (nature), a tension first articulated by the Greeks.

The tension between these two, nomos and physis, is presented in two ways: by Solent's thoughts, and by the narrative voice, including plot and description.

Solent, as an educated man, sees the world in terms of Greek mythology. At times of stress he utters the Greek lament: Ailinon, Ailinon (Woe!) from Aeschylus, and he is aware of nymphs, dryads and other mythical creatures lurking in the undergrowth. Powys underpins all his novels with a mythical foundation, usually Arthurian or from the Mabinogion. Wolf Solent is unusual in using classical Greek mythology as a foundation, underlining further the nomos - physis dialogue.

Solent is acutely aware of nature, and of his position as a consciousness- endowed being in nature: nature was always prolific of signs and omens to his mind; and it had become a custom with him to keep a region of his intelligence alert and passive for a thousand whispers, hints, obscure intimations that came to him in this way. At key moments in the novel, he succumbs to reveries about nature and his position -as a representative of humanity- in nature. He has the ability, shared with the squire, to see things stripped of the mischief of custom. He constantly has flashes of intuition, in which the social world appears as superficial, and the natural world as the only reality: my world is essentially a manifold world. He exists in a kind of suspended state between cosmic immensity, and microscopic detail, a kind of Blakean vision of the whole world in a grain of sand. In the face of the primal silence of nature, the social conventional dilemma in which he finds himself - married to one woman but in love with another - appears meaningless and trivial, a creaking barge, merely the mischief of custom.

In a key passage, Solent engages in an imaginary dialogue with the skull of his dead father (the disembodied head is a key motif for Cowper Powys, and one that comes from the Mabinogion). Wolf asserts that reality is an illusion caused by consciousness, while his father asserts that the only reality is the natural world: "There is no reality but what the mind fashions out of itself. There is nothing but a mirror opposite a mirror, and a round crystal opposite a round crystal, and a sky in water opposite water in a sky, " asserts Wolf. "Ho! Ho! You worm of my folly," laughs the skull, "Life is beyond your mirrors and your waters. It's at the bottom of your pond, it's in the body of your sun, it's in the dust of your star spaces, it's in the eyes of weasels and the nose of rats and the pricks of nettles and the tongues of vipers and the spawn of frogs and the slime of snails."

Wolf believes that every human being is the possessor of a 'life illusion', a motivating force that underpins all interactions with the world and which defines the character of each person. To a certain extent, the novel is about how Wolf loses his 'life illusion' and ultimately sees that the real purpose of life is to forget and to enjoy, to endure and to escape, to surrender nomos in the face of physis. This takes place in the arena of a struggle between his mother, and his father. His mother represents nomos: What's the use of tilting against conventions? It's more amusing, it's more interesting, to play with these things. They're as real as anything else, she says. His father represents physis: "Life in me still, you worm of my folly, and girls' flesh is sweet for ever and ever; and honey is sticky and tears are salt, and yellow hammers' eggs have mischievous crooked scrawls."

In the plot, the nomos - physis tension exists, as we have seen, in the social conventions of Wolf's marriage and the various adulteries surrounding it, and how these conventions appear when set against the natural world of physical love and procreation. Another key area in which this tension exists is in sex.

Nomos sanctions certain kinds of sexuality, and outlaws others, while physis has no attitude at all towards them. From the point of view of physis, all kinds of sexuality are natural, and sexual identity is seen as much more complicated than a mere hetero-homo duality. Nothing is against nature. That's the mistake people make, and it causes endless unhappiness. The minor characters all embody different kinds of sexuality: the bookseller Malakite and his two daughters embody incest; Wolf's own father, a promiscuous but now dead figure, embodies rampant heterosexuality uncomplicated by convention; the squire's obsession with Wolf's predecessor, the young man Redfern, represents a suppressed necrophilia; there are various homosexual relationships suggested between the vicar and the local poet, and Wolf himself is aroused by the sight of two village youths swimming naked in the local pond. One of these youths is his wife's lover, and Wolf is fascinated by the sight of the young man's genitals floating on the surface of the pond. His jealousy is tinged with envy. Celibacy is represented by the hideously ugly spinster Selena Gault who nurtures an undying but unreciprocated passion for Wolf's father; conventionalised sexuality is represented by Wolf's mother. Considering the book appeared in 1929, Cowper Powys was way ahead of his time both in his ideas about sexuality and in his depiction of it.

The book balances descriptions of social life with nature, and it is in these last that the enduring power of the book lies. No other prose writer in the language comes close to the power of Cowper Powys's writing on nature. His prose descriptions of the natural world can best be compared with the nature poetry of John Clare, Blake and Dylan Thomas. Cowper Powys can take us in one sentence from the furthest reaches of cosmic space to a drop of water on a frog's back.

His writing has an intensity of vision that lingers in the mind long after the book has ended, and which enhances the way we view our surroundings. If greatness in art is measured by its ability to rattle us, to change the very way we perceive the world, this book is very great art indeed.

My 'I am I' is no hard, small crystal inside me, but a cloudy, a vapour, a mist, a smoke hovering round my skull, hovering around my spine, my arms, my legs. That's what I am, a vegetable animal wrapped in a mental cloud, and with the will-power to project this cloud into the consciousness of others.

Fantastic review. I absolutely must read this next as it touches on some of the same themes addressed by Cormac McCarthy in his Border Trilogy.

Can we look forward to yr thoughts on Porius?

Thank you all. Watch this space for an upcoming monster essai on Porius.