In a famous (notorious) passage from Les Miserables, Hugo carefully encrypts the gay character of Grantaire, one of the group of revolutionaries on the barricade. From the very beginning his difference is signaled: he is the lone sceptic among a group of idealists. He is introduced as a character apart from all the others. The passage begins with a characteristic Hugolian rhetorical device: the question- answer: How came he there? By juxtaposition. This highlights the clue as to how we are to read the text: by the means of juxtaposition the character will emerge and we shall see him there.

I quote the passage in full below. I have divided it very loosely into lexias creating two levels of discourse placed in juxtaposition to each other. The level of the highlighted lexias carries the encoding; these lexias signal to the knowledgeable that Grantaire is gay. The level of lexias not highlighted ambiguates, disguises, normalizes the highlighted level, 'protecting the innocent' and keeping Hugo well away from controversy or censorship. In constantly switching between these levels, the discourse takes one step forward, and two steps back; points out the character's gayness, and then ambiguates it; reveals it and then hides it immediately; flashes it, then veils it. Let's follow this dance.

However, this sceptic had one fanaticism. This fanaticism was neither a dogma, nor an idea, nor an art, nor a science; it was a man: Enjolras. Grantaire admired, loved, and venerated Enjolras. To whom did this anarchical scoffer unite himself in this phalanx of absolute minds? To the most absolute. In what manner had Enjolras subjugated him? By his ideas? No. By his character. A phenomenon which is often observable. A sceptic who adheres to a believer is as simple as the law of complementary colors. That which we lack attracts us. No one loves the light like the blind man. The dwarf adores the drum-major. The toad always has his eyes fixed on heaven. Why? In order to watch the bird in its flight. Grantaire, in whom writhed doubt, loved to watch faith soar in Enjolras. He had need of Enjolras. That chaste, healthy, firm, upright, hard, candid nature charmed him, without his being clearly aware of it, and without the idea of explaining it to himself having occurred to him. He admired his opposite by instinct. His soft, yielding, dislocated, sickly, shapeless ideas attached themselves to Enjolras as to a spinal column. His moral backbone leaned on that firmness. Grantaire in the presence of Enjolras became some one once more. He was, himself, moreover, composed of two elements, which were, to all appearance, incompatible. He was ironical and cordial. His indifference loved. His mind could get along without belief, but his heart could not get along without friendship. A profound contradiction; for an affection is a conviction. His nature was thus constituted. There are men who seem to be born to be the reverse, the obverse, the wrong side. They are Pollux, Patrocles, Nisus, Eudamidas, Ephestion, Pechmeja. They only exist on condition that they are backed up with another man; their name is a sequel, and is only written preceded by the conjunction and; and their existence is not their own; it is the other side of an existence which is not theirs. Grantaire was one of these men. He was the obverse of Enjolras.

First thing to note is the all-male environment, always the main clue. The prison in Dostoevsky's Notes from the House of the Dead also provides the context for an encoding of gay characters. Likewise the love story of Varena and Olive in James's Bostonians is set in an all female context of the woman's movement. Context is everything.

We are then told that Grantaire 'loved' Enjolras, but the word is juxtaposed by two, more innocuous words: 'admired' and 'venerated'. We are to understand these two words ironically, as we have already been told, emphatically, that G is the only sceptic in the group, a position incompatible with admiration and veneration.

The word 'unite' is of course pregnant with meanings. We are told that his longing to unite with Enjolras is G's character, his nature.

Then comes the characteristic Hugolian rhetorical device of a disembodied incomplete fragment: A phenomenon often observable, meaning, we can see homosexuals everywhere around us, but we may not talk about them. The subject is unmentionable, unspeakable. The incompleteness of the fragment, and its position in the discourse signals its significance.

Then, we are told that Grantaire 'needs' Enjolras, another significant word: necessity implies lack of choice in the matter, a natural imperative.

More significant word choices and juxtapositions follow: 'chaste' juxtaposed with the phallicly suggestive 'hard' and 'upright'. The words 'soft, yielding, dislocated, sickly, shapeless' are used: these are very common words to describe gay characters in 19th century medical, social and legal discourse. They act as blaring signals, but the discourse ambiguates them by attaching them to Grantaire's ideas, not his nature. Again, this is incompatible with Grantaire's hard scepticism, so we are meant to take the attachment of these words to the character's ideas as ironic. Then the words 'moral backbone' are used, another standard contemporary view of homosexuality.

Then, buried towards the end of this long paragraph, we have a list of classical references, all same sex couples. 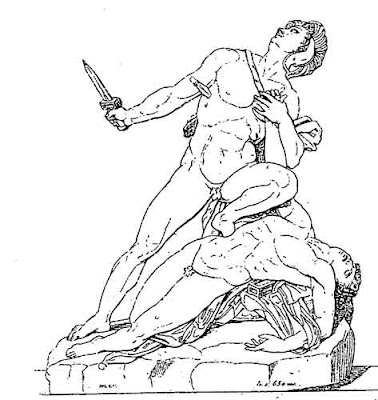 Admittedly Pollux was a 'twin' of Castor, but there is no doubt about their attachment to each other. Patroclus was famous as the lover of Achilles, the boyfriend whose funeral games form the content of the 23rd book of the Illiad. Nisus and his partner Euryalus feature in an episode of Virgil's Aeneid in which they are cruelly separated. Ephestion was the boyfriend of Alexander the Great. Since antiquity their relationship had been compared to that of Achilles and Patrocles, as they also compared themselves.

Pachmeja was an eighteenth century French author of a work called the Telephus. He was famous in his life for his great friendship with De Breuil- the two lived together and shared their incomes. Lempriere, in his Universal Biography of 1810, calls them the Pylades and Orestes of France. This later couple, referred to by Hugo himself at the end this passage, have been paired from earliest antiquity, and were a very well known code in the 19th century for a same sex couple.

The encoded meaning of Eudamidas's presence on this list is lost; he was a Spartan king, and the subject of a painting by Poussin. It is not sure what Hugo meant by this reference. It is an example of what Robb means when he says that the symbols for encoding gay love have become less decipherable. Perhaps it referred to some long forgotten local scandal of the time of writing; perhaps to an article on Poussin's painting, now lost; perhaps the meaning is Sparta itself, a society in which homosexuality is known to have flourished. Perhaps Hugo just liked the euphony of the name, and used it to throw in a red herring, a juxtaposition.

The list is preceded by this statement: His nature was thus constituted. There are men who seem to be born to be the reverse, the obverse, the wrong side. For 'obverse' and 'reverse', of course, read 'inverse', or 'invert', one of the standard liberal, neutral designations for homosexuality in the 19th century.

The discourse comments on this list: They only exist on condition that they are backed up with another man; their name is a sequel, and is only written preceded by the conjunction and; and their existence is not their own; it is the other side of an existence which is not theirs.[...] Grantaire was one of these men. He was the obverse of Enjolras.

(The translation of 'backed up' here is perhaps less than felicitous...)

Then follows a short paragraph, in which 'juxtaposition' gives way to 'affinity', and in which Orestes and Pylades, those archetypal classical gay lovers, are matched to the phallic suggestiveness of their initials in an alphabet: the 'zero' of O and the 'one' of P.

One might almost say that affinities begin with the letters of the alphabet. In the series O and P are inseparable. You can, at will, pronounce O and P or Orestes and Pylades.

Graham Robb: Strangers: Homosexual Love in the 19th Century
Posted by Murr at 10:40 AM

I missed this completely when I was reading through Les Mis. If I had been less ignorant of classical relationships I might have caught on, but nope.

Unknown said...
This comment has been removed by a blog administrator.
7:13 PM

Very thoughtful, interesting, commentary with good evidence to back it up.