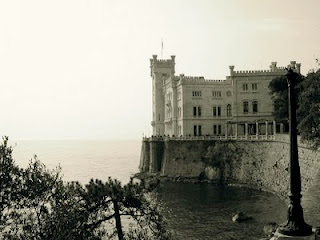 Ms Morris is widely regarded as one of the most pre-eminent living travel writers in English. With books on Spain, Hong Kong, Trieste, Venice, Wales and the Middle East, as well as a magisterial three volume history of the British Empire, she combines an eye for metonymic detail, a nose for the weird, the fabulous or the eccentric, and a writing style that is at once lyrical, sensuous and gently witty. In the two novellas that comprise this book, Morris puts her gifts to work to describe an entirely fictional place, with its own fictional culture, and a fictional history to go with it.

Last Letters from Hav

This first novella describes a visit Morris made to Hav in 1985. She weaves together the strands of history and images from her travels in real places to conjure up a place that is part Ottoman Empire, part Chinatown, part Eastern Europe, including Greece and Turkey, part Moorish Spain, Venice and the Levant.

Hav is a south-pointing, self-contained peninsula cut off from the world by an escarpment, and only accessible by sea, or by a spiral tunnel carved through the cliff. It appears to be located on the north shore of the Mediterranean, east of the Chersonese, but west of Galipoli. Due to its location, it has been the possession at various times throughout its history of the Arabs, the Seljuks, The Ottomans, the Venetians, the Russian Empire, the British and the UN.

All these historical influences are woven together to create an unforgettable portrait of a place that doesn’t exist, replete with detailed and evocative descriptions of squares, streets, public buildings, parks and slums; offshore islands, a lagoon, salt marshes and windy promontories; historical anecdotes and oral traditions; mores and manners; food, language and costume; and people: hoteliers, intellectuals, public servants, and other visitors.

Verisimilitude is strengthened by the inclusions of real travellers who have left records of their visits to Hav, including Marco Polo, DH Lawrence, Mark Twain, Chekhov and Ibn Battuta; Diaghelev and the Ballet Russe visited, Nijinsky walked alone on the windswept cliffs, Rimsky- Korsakov played for the Romanov Governor, and Freud gained new insights into the human personality while staying in the House of the Chinese Master.

Throughout wanders the traveller ‘dirleddy’ (a Havian title) Morris, with her copy of Braudel’s History of the Mediterranean and the Mediterranean World in the Age of Phillip II, her yellow sunhat from Australia and her sensible slacks, and her keen, observant intelligence, sitting in cafes on the waterfront watching the people, musing in the mazes of the medieval Arab medina, taking notes, visiting the sights, and making friends. 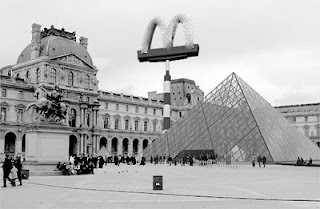 Hav of the Myrmidons

The second novella describes a visit made to the peninsula in 2005, as a guest of the Government. In the intervening period, Hav has been saved from external invasion by a seizure of power from within by a group called the Perfects, a mysterious oligarchical sect, who have dragged Hav into the modern world, built over the ruins of the past and established a strong society based on a spurious ideology in which the Perfects claim descent from Achilles’s Myrmidons.

Morris’s first book on Hav has been banned by the state, or rather, it is unobtainable for administrative reasons, but she has nonetheless been invited back, ostensibly, to write glowingly about the achievements of the new Hav. She is carefully chaperoned by guides, who gush the official party line about the greatness of the Perfects, the nobility, antiquity and authenticity of their origins, and the great miracle they worked in saving Hav from foreign oppressors. She is allowed to drive around the city and see for herself the changes that have been wrought.

The graceful strata of the past have been forcibly eradicated, and the elegant streets and squares of Hav have been transformed into something of a cross between Pyong Yang, Los Angeles, and a theme park. The Arab medina and the elegant quarter of the foreign legations have been replaced by freeways, impersonal shopping malls and featureless government buildings; the islands in the lagoon have been joined by landfill and transformed into a giant hotel and leisure complex called the Lazaretto! the name written with an exclamation mark because we believe you will find it a truly exclamatory experience, complete with golf buggies and guards to prevent visitors from roaming into the city; the slums have been cleared away and replaced with a huge (but useless and underused) international airport, and the salt marshes have been reclaimed and turned into industrial farms growing GM crops year round under plastic. Her old friends have been given futile jobs in the bureaucracy, or have fled, or are under constant surveillance, and all the phones are bugged.

The Peninsula is dominated by an enormous Tower, capped with a giant neon M, and the logo of the Perfects -a Myrmidon helmet- is a ubiquitous feature of the new Hav.
Morris muses on the meaning of this M. The great ‘M’! ‘M’ for what? ‘M’ really for Myrmidon, or ‘M’ for Mammon? For Mohammed the Prophet? For Mani the Manichean? ‘M’ for Macdonald’s, or Monsanto, or Microsoft? ‘M’ for Melchik? ‘M’ for Minoan? ‘M for Maze? Or, could it possibly be, I wondered as we droned on through the darkness, and I fell into an uneasy slumber, ‘M’ for Me?

Morris’s book is a pleasure for armchair travellers, those who like to look at maps of places they have never been to, and dream of the things they might see there. It’s also a delightful addition to the literature of the spurious, of the fake, of the illegitimate, of fantasy. Morris carefully blurs the boundary between the real and the fantastic, including spurious citations from real writers, fake appearances by real people, and pseudo incursions from otherwise real historical trends. The text wittily signals its self-conscious spuriousness in a number of ways: by the obviously faked ideology of the Perfects, by the visits of two renowned con artists, Sir Edmund Backhouse, notorious forger of ancient Chinese documents, and Anna Anderson, the self-styled Grand Duchess Anastasia; and by the use of the maze as a traditional Havian symbol, an oblique homage to the father of all things spurious, Jorge Luis Borges.

Morris makes a few important points about the nature of travel writing and about the spurious in general. I read a book about a real place I have never been to (Jan Morris’s book on Venice, for example), and through this reading create its features and uniqueness in my mind. This place has the same status in my imagination as a fake place that doesn’t exist: both are ultimately wholly imaginary. In the absence of actually physically going there and seeing for myself, the only way I can check the veracity of Morris’s description of Venice is by reading or seeing other documentation of it, but this documentation might also very well be spurious. I have to take its authenticity on trust, or on received wisdom. The literature of the spurious illuminates the weakness of the foundations, the shaky status, of real knowledge.

Hav is an allegory, but Morris is not sure of what. In her Afterword, she states that she leaves it to us to decide what the allegory is. The two views of Hav lay bare the fundamental but often unspoken impulse behind all travel writing – nostalgia. At the same time, they suggest that it is an allegory of the gradual eradication of the layers of the past, and their replacement by a kind of totalitarian corporatism in which the physical signs of historical awareness are erased and replaced by an environment invented by marketers, architects and social engineers all in the name of progress, convenience, a higher standard of living for all, internal stability, and of course higher profits. Like Macdonald’s in the Louvre, or Starbucks in the Forbidden City, the present defiles the past, rather than existing in harmony alongside it. The delightfully idiosyncratic and eclectic is swept away by uniformity, comfort and the demands of consumerist materialism.

This process has happened and is happening all over the world, in the most jewel like of cities, and traveller and citizen are equally impoverished by this process
Posted by Murr at 9:34 PM