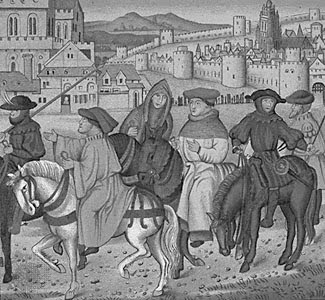 Imagine The Name of the Rose written by DH Lawrence in a Tolkein novel.

It is 1272. Roger Bacon, Franciscan, Aristotelian, scientist and inventor, and probably the most modern mind of the medieval world, is a virtual prisoner of the Catholic Church in Bumsett Priory in Wessex. He has constructed a brazen head, an automaton. His arch enemy Bonaventure, soon to be Pope, arrives to interrogate him for heresy. Bacon’s allies summon Albert of Cologne to assist in the debate. Meanwhile, the Lord of the Manor of Roque, Sir Mort, is engaged with war with the neighbouring lord of Lost Towers, the evil Sir Maldung. Peter Peregrinus, sometime mercenary, owner of a lodestone, magician, has come to Bumsett to destroy the head and proclaim himself antichrist in the presence of Bonaventure. Meanwhile, the giant Peleg, loyal henchman of Sir Mort, has been reunited with his lost love the jewish girl Ghosta, who is chosen by Bacon to assist in the baptism of the brazen head…

Welcome to the strange world of John Cowper Powys, one of the most eccentric and brilliant of the British novelists of the 20th century.

The medieval world is conjured up magnificently, especially in the relationship of the main characters with nature, which is a strong presence in the book, as it is in all Cowper Powys’s work. Powys’s view of man’s place in nature is profoundly holistic, mystical, metaphysical. Trees, streams, marshes, flora and fauna take on living characteristics, and have as strong an impact on events as do ideas and historical forces. In an incident that is typical of Powys’s world view, one of the characters, in running across a field to stop the marauders, slips and falls, because he has by chance or fate or causality stepped on two baby moles who have just been weaned and have crawled to the mouth of their burrow, where they are blissfully asleep in the sun for the first time in their tiny lives, only to be crushed into a bloody mess by the heel of the runner. Most of the similes in the book revolve around natural processes of decay and regeneration, and the descriptions of nature are marvellous.

Cowper Powys is profoundly anti-Catholic, and the internal monologues of Bonaventure are sardonically funny, satirising the pretentious nonsense of scholasticism and the theologians. I must make them understand that I have so yielded myself to God that His will is now my will and my will entirely His will…. It is all in my love for God and His love for me. We love each other so much that I feel sure God allowed me to be with Him…. When anyone loves God as I do He gives you wonderful privileges… Part of the narrator’s rage at the Catholic church is the way that Christianity has usurped the power of love for its own nefarious ends, and this is also the occasion for sarcasm: You may now learn that the great God of Love, and I his disciple in Love, are about to punish punish punish this thrice accurst Roger Bacon, till not only his Brazen Head but his own worse than brazen skull will split into atoms.

In contrast to the iniquities of religion, is this image of Bacon and Ghosta observing the dust motes dancing in a beam of sunlight. Bacon comments: This whole business of being one of the lucky millions of dust-specks, out of the trillions and quadrillions of less lucky ones, must be so exciting to every one of those little objects that the whole of its being would be so absorbed in what is happening to it that it wouldn’t have a particle of power left to ask a question of anybody. Yes, and I would say… that if it had any choice left to it, it would feel it was wiser to lavish all its power of response on that lucky moment than to ponder on suitable philosophical questions to put to-….

The image and the comment on it are typical of Cowper Powys’s whole world view, which emphasises the immediacy of individual response to life, a metaphysical view of nature, and a revolt against bullshit and authority. The book is full of marvels, full of insights, remarkably drawn characters, and all presented in rich, lush prose. Cowper Powys is the kind of writer who is not afraid to take risks. He doesn’t always pull them off, but you have to admire him for trying. An oddity, to be sure, but there is more sheer originality of vision and art on one page of Cowper Powys than in whole books by most contemporary novelists.
Posted by Murr at 11:16 AM

Pleased to know about this one; recently finished Owen Glendower & surprised me how much it affected me, almost subliminally, so to speak. Have you read Porius?

No, not yet. Have you? The only other novel I have read is A Glastonbury Romance, which I vaguely remember as very fine- I read it least 25 years ago. I've read lots of his poetry and some of his letters, and some of the more odder philosophical tracts. He's an intriguing figure.