Pushkin had a somewhat Mozartian sense of humour, which he directed as much at himself as he did at the government and his literary rivals.

Here he is writing about the illustrations to Eugene Onegin which appeared in The Nevsky Almanac in 1829:

1.
Here after crossing Bridge Kokushkin
With bottom on the granite propped,
Stands Aleksandr Sergeich Pushkin
Near M'sieur Onegin he has stopped.

Ignoring with a look superior
The fateful Power's citadel,
On it he turns a proud posteriror:
My dear chap, poison not the well!

This is Pushkin's own drawing of the scene, on which the Almanac's illustrations were based. The drawing illustrates Canto 1 Stanza 47. 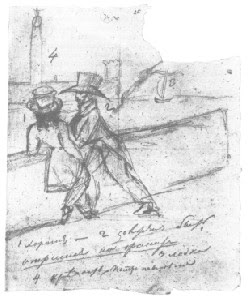 2.
Through her chemise a nipple blackens:
Delightful sight: one titty shows.
Tatiana holds a crumpled paper,
For she's beset with stomach throes.

So that is why she got up early
With the pale Moonlight still about,
And tore up for a wiping purpose
The Nevski Almanac no doubt.

Here is an early drawing by Pushkin of Tatiana. 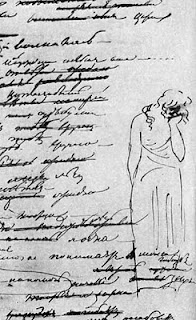