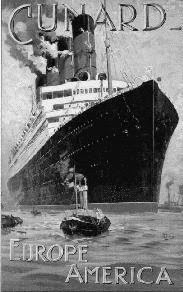 And yet in the midst of these terrors, I was placed in a situation so exquisitely ridiculous that even then I had as strong a sense of its absurdity, as I have now; and could no more help laughing than I can at any other comical incident happening under circumstances the most favourable to its enjoyment.


Charles Dickens and DFW shared more than a voyage at sea. While Dickens was describing his first trans-Atlantic crossing, in this title essay of the eponymous selection, DFW describes, on assignment from Harpers, a luxury Caribbean cruise. It is an opportunity ripe for beady eyed observations of social behaviour and the zeitgeist, and DFW rises to it with Dickensian aplomb, describing his fellow passengers and shipboard activities, organised or otherwise, with delicious laughter and thought-stopping insight.

Here he is on the Professional Smile.

You know this smile, the strenuous contraction of circumoral fascia w/ incomplete zygomatic involvement – the smile that doesn’t quite reach the smiler’s eyes and that signifies nothing more than a calculated attempt to advance the smiler’s own interests by pretending to like the smilee….Am I the only consumer in whom high doses of such a smile produce despair?...
And yet, the Professional Smile’s absence now also causes despair. Anybody who’s ever bought a pack of gum in a Mahattan cigar store, or asked for something to be stamped FRAGILE at a Chicago post office or tried to obtain a glass of water from a South Boston waitress knows full well the soul-crushing effect of a service workers’ scowl, i.e. the humiliation and resentment of being denied the Professional Smile. And the Professional Smile has by now skewed even my resentment at the dreaded Professional Scowl. I walk away from the Manhattan tobacconist resenting not the countermans’s character or absence of goodwill but his lack of professionalism in denying me the Smile. What a fucking mess.

It takes a special kind of sensitivity and vision to be aware of the soul-destroying effect of the impact of customer service standards that lie at the heart of all anonymous social interactions in these high and heady days of late stage capitalism, driven as it is by the two gods of Marketing and Brand Building; how they have irredeemably soured the soul. Simple good old- fashioned 19th century manners are no longer enough. We need interactional behavioural competencies, and they need to be motivational and (above all) measurable. It takes writers of unusual calibre to both clearly see through the mores of their time to the essential unchanged humanity beneath them, and to describe them from inside, participating within them rather than just omnisciently describing them as an observer. Like Dickens, in DFW’s writing here, there is no sense of distance between the narrative voice and the subjects it describes, as there is, say, in DeLillo’s or Eliot’s.

DFW’s writing both reflects and shapes the consciousness of our times rather like Dickens's did his: his endlessly digressive style, the split concentration on what is being observed and how he is reacting to it, the short attention span coupled with the obsessive curiosity of the chronic browser/flaneur, the colloquial vocabulary and simplistic, end on end, syntax, the very generalised profanity reflecting a pervading sense of outrage, the funny names betraying an involuntary intoxication with language. The Greek Ship's Officer named Demetrios is renamed Dermatitis by the narrative voice in a what seems to me to be a very Dickensian way. Like Dickens's parodies of journalese, which caught the echoes of his times, the plethora of footnotes in DFW's prose echo the hyperlinks of the internet, causing the reader to mimic the reading style used for the internet. He slyly positions himself as one of us, a (chatroom or forum) buddy, and thereby makes us see what he sees and what before we had not.

Two hundred years from now, if Western Culture still exists, it will be DFW and Pynchon who will be the representatives of our times in the way that Dickens and Trollope are of theirs, I'll wager.
Posted by Murr at 8:07 PM

I'm still working my way through that volume -- I love your comparison. Will say mor eon your thread (if I may despite my anti Housman mumblings!)