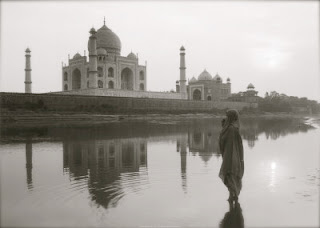 Is this an Indian disease? This urge to encapsulate the whole of reality?
Salman Rushdie

One of the characters in this book is a poet who is writing a novel. The novel in progress is described as a river, like the Ganga, with lots of tributaries and creeks. This image, of course, stands as an emblem of the method of A Suitable Boy itself, and is one of the very rare metafictional devices in a book that is otherwise wholly without any trace of modernity. It’s as if Seth is writing from a space uninfluenced by modernism, magical realism, hyperrealism, post-structuralism, deconstruction, or any of the other games beloved by post-modernist novelists and theorists. No tricks with narrative sequence or voice or point of view, or implied readers brought to the surface, or fractured and blended images, funny voices or intertextual cleverness. What we have instead is a slow and measured unfolding of events and scenes in one, organic, huge, all-encompassing magisterial narrative in the mid Victorian style; an Indian Trollope or Dickens or early Eliot, or Balzac; or indeed a modern Mahabharata.

The story involves a widowed mother’s search for a suitable husband for her youngest daughter, but encompasses very much more than that. The story of the Mehra family is interleaved with the stories of three other families, with whom they are connected by birth, marriage or friendship. These families in turn are connected with a host of subsidiary characters, the crowds of the fictional city of Brahmpur and the real cities of Calcutta and Delhi, the province of Pruvah Pradesh and ultimately the whole of India. The time is the year 1951/2; the political and social backdrop is the run-up to the first General Election in the country’s history. Muslim and Hindu, their religions, customs and values, as well as the relationship between them, are both equally represented. The quest for a suitable boy provides a structural backbone, as old and as honoured and as reliable a narrative device as the river Ganga itself, and is complicated, in the best traditions of the 19 century novel, by an interweaving plot involving family secrets that ultimately effects all the characters.

The scope is Tolstoyan. Huge epic scenes of riots, stampedes, public processions, parliamentary debates and political shenanigans among real historical characters are balanced with intimate descriptions of family meals, the ruminations of the fictional characters as they work through their moral dilemmas and relationships, the passing of the seasons; the text is full of portraits of birds, children and the eternal poor of both city and countryside; references to and detailed descriptions of Indian music, movies, food, festivals, religious mania, poetry, appear as part of the narrative, embedded in it through the characters, not flashed around as authorial digressions. Everything is presented but never explained.

The characters are all superbly drawn and lifelike; they almost present themselves. The relationships between them evolve and change as the year progresses and as events exercise their inexorable pull. All the characters are highly memorable and take on independent life in the mind of the reader. One wonders about them, and what they are doing when the book is closed. This is a huge achievement, given the length of the novel and number of characters.

Seth’s (19th century) theme is family, and marriage, specifically arranged marriages. Other themes include the position of women generally in Indian life, and specifically women in purdah, academic life, political life, business life, economic life, cultural life, Muslim-Hindu relations, the caste system, and so on. Each sphere of social activity, each layer of society has a story, and characters to present it, and this is done entirely unselfconsciously: what stands always to the fore is the characters and their situations and how they interact. The whole of India in one year is presented through its people.

Seth’s greatest achievement is the narrative voice, which is always self effacing and utterly transparent. Themes and issues are presented with a steady consistency of imaginative objectivity. We see these concerns as the characters see them: there are no distancing devices, no poking through the veil of ideologies, no historical hindsight, no modern gap between what the narrative presents, and how it is presented. Throughout the book, whether in the Hindu or Muslim sections, issues and institutions are presented entirely without judgement from a (modern) (Western) external perspective, but from inside the story itself, just as the characters see them. We are completely brought in and made part of the story; we inhabit the same mental (and physical- Seth’s writing is highly pictorial and intensely evocative) space as the characters. In willingly suspending our disbelief as we become absorbed in the novel, our own ideology and even our own values slowly dissolve as we come to understand the characters and their world as they see it. When Lata finally makes her choice as to which of the three young men she is going to marry (shades of Basanio’s choice in reverse), we may feel disappointed with her choice, but we completely agree with it and understand it.
This is surely the purpose and power of great fiction.
Posted by Murr at 10:55 AM

What a fantastic review. A Suitable Boy was already on my tbr list. I am anxious to read it soon now.

rushdie is a pompous ass