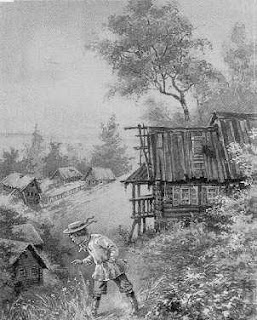 What’s the good of a man like you? You might as well be a bundle of straw.

I wish I could lie down and go to sleep for ever.

This magnificent book is about whether to simply endure life or to really live it, and if the latter, then how.

Ilya Ilyitch Oblomov is a good-hearted man of independent means who lives a life of excessive laziness. Ensconced in his bed, or on his sofa in one room in his apartment, he spends his days in his worn and filthy dressing gown doing nothing, not even reading or writing (there is not a shred of paper in the place, and the ink in the inkwell has dried up), and bickering incessantly with his servant, Zahar, who has been with him since his childhood and treats his master with a mixture of contempt, devotion, insolence and humility. At times their relationship takes on some of the hilarious character of Beckett’s ambiguous and bleak male-male relationships:

“You lose everything,” [Zahar] remarked, opening the door into the drawing room to see if the handkerchief was there.
“Where are you going? Look for it here. I haven’t been in there for two days. Do be quick,” Ilya Ilyitch said.

The plot involves Oblomov’s struggle to escape the vice of sloth, in his failed love affair with the ravishing Olga Sergeyevna, his growing love for his landlady Agafya Matveyevna, and the machinations of her brother and his crony to rob Oblomov of the income from his estate. Oblomov is motivated by a drive to achieve the perfect bliss of family life, to which he thinks Olga can help him. Ironically, he achieves this state only with his landlady, and it takes him a while to realise this. Olga eventually marries Oblomov’s childhood friend, the worldly and practical Stolz, while Oblomov succumbs to the enervating effects of indecision, prevarication and idleness.

The theme of the true nature of love is dealt with in the relationship between Oblomov and Olga, and later in the relationship between Olga and Stolz. Early in their love, Oblomov panics and writes a long letter to Olga, warning her away from him, declaring that her love is a mistake. He clearsightedly warns that the projection of a false ideal on to an object of potential love can be mistaken for love itself; indeed that love often consists in this very projection: What you feel now is not real love, but only an expectation of it; it is merely an unconscious need of love which for lack of proper fuel burns with a false flame that has no warmth in it. The relationship between Stolz and Olga, which comes to prominence in the third part of the novel, is very well drawn with great psychological subtlety. The older Stolz teaches Olga the real meaning of love, and the relationship stands as a wonderful symbol of the marriage of innocence and experience: With the lamp of experience in his hand he ventured into the labyrinth of her mind and character, discovering each day new facts, new qualities….When Olga experiences depression later in their married life, it is Stolz who helps her most with these extremely wise words: Your sadness and yearning is rather a sign of strength. A lively active mind strives sometimes to go beyond the boundaries of life, finds of course no response to its questionings, and the result is sadness, temporary dissatisfaction with life… it’s the sadness of the soul questioning life about its mysteries. That is what one has to pay for Prometheus’s fire! You must not merely endure but love this sadness and respect your doubts and questions, they are the overflow of the luxury of life and appear for the most part on the summits of happiness. Through the character of Stolz, Goncharov reveals himself as great a philosopher of love as Stendahl.

Another marriage depicted in the novel, is that of the peasant Zahar, and the housekeeper Anyissa. She is extremely able, and puts Zahar’s clumsiness, and laziness constantly to shame, for which he exacts revenge by thrusting his elbow sharply into her breasts. Behind the high comedy of this marriage lurks the foresight of the great artist, in which the complex position of the peasant in Russian culture is symbolically described. Anyissa shows Zahar the correct way to do housework, to which Zahar responds: You stupid, I have done it my way for twenty years and I’m not likely to change for you. This little exchange exemplifies the hostile and bitter reaction the idealistic Populists were to encounter 15 years later during the 1870s in their attempts to better the peasants’ lives and improve them through modern agrarian methods and literacy. The presence of the servants in the novel added force to the controversy around the book. Goncharov’s contemporaries held that the Oblomov-Zahar relationship depicted the corrupting influence on both parties of the institution of serfdom. In the indolent figure of Oblomov, moreover, they saw a critique of Russian laziness and ineptitude, and in the practical figure of Stolz (a Russian German whose name means ‘proud’) a symbol of superior Western know-how, which Westernizers saw as the only and ultimate saviour of Russian problems. Our men of action have always been of five or six stereotyped patterns: lazily looking around them with half closed eyes, they put their hand to the machine of state, sleepily pushing it along the beaten track, treading in their predecessors’ footprints. But behold, their eyes are awakening from sleep, bold, lively footsteps can be heard, and there is a sound of animated voices… Many Stolzes with Russian names are bound to come soon! Oblomov thus acts as a bridge between the Slavophile/Westerniser debates of the 1840s, and the Father/Son debates of the 1860s as well as more generally articulating the Asian/European dialectic that has been at the heart of Russian culture since the age of Peter.

The book is of course an examination of laziness. The main foil for this is Stolz, who is a direct opposite of Oblomov, a man of action, an entrepreneur, a traveller and a socialite. Stolz claims that Oblomov is wasting his life lying on the sofa, and that the purpose of life is work, ambition, transcendence: live for the sake of the work itself, and nothing else. Work gives form and completeness and a purpose to life. Oblomov claims to the contrary that it’s his mode of life that is the real living, and that men of action are simply hiding from the fact that their lives are meaningless: There is no centre round which it all revolves, there is nothing deep, nothing vital. All these society people are dead men, men fast asleep, they are worse than I am. Empty reshuffling of days! Oblomov claims that his laziness makes him conscious of the gentle flow of life, of the delicious splashing of its stream, a moment by moment awareness of the passing of time that the busy men of action have no awareness of, but which should be the real purpose of existence: Isn’t the purpose of all your running about, your passions, ways, trade, politics, to secure rest, to attain this idea of a lost paradise? Oblomov is aware of the damage to his character his sloth is causing: he was painfully conscious that something fine and good lay buried in him and was perhaps already dead or hidden like gold in the depths of a mountain. But at the same time, he is an artist working in dreams. In part one, there is a long chapter entitled Oblomov’s Dream (the only named chapter in the novel) in which Oblomov’s childhood on his estate Oblomovka is described in idyllic terms. While this section gives plausibility to Oblomov’s psychology (he is shown to have been spoilt by over-indulgent parents, particularly his mother) it stands at the same time as a symbol of the golden age of Russia’s past, a vision of an ideal future towards which all Russians should strive, and a vision of a dreamlike alternative to the grimness of reality. This section was published separately in 1849, ten years before the rest of the novel, and did much to stoke the controversy the book aroused. Stolz loves to listen to Oblomov’s depictions of a perfect life on his estate, in which Oblomov paints a word picture of a kind of rural idyll with no falsity, no strife, a state of pure communion amidst plenty and the beauty of nature: Go on painting your ideal of life to me. Humanity at all times in all places has yearned for this dream: it is called peace.

Oblomov is one of the first novels in literature to deal explicitly with the concept of leisure time. Leisure time exists as an unarticulated fact in 19th century literature, both in novels and outside them, and is related to the emerging urban middle classes, who were not always working (like the rural peasantry) or not always doing nothing (like the landed aristocracy) but who switched between the two. However, it is not explored as a conscious theme until Oblomov. Oblomov used to have a job, but he gave it up when he became aware of the split between his working self and his leisured self: When do I live? He keeps repeating like a mantra throughout his working life. When then are you going to live? Why slave all your life? Oblomov is the first character in 19th century literature to voice the difference between the working self and the leisured self, and to reject the drive for personal transcendence and social betterment. Dostoevsky is claimed to have said: “We all come out from under Gogol’s overcoat”. Likewise, we are all the inheritors of Oblomov; out from under his filthy dressing gown, come Des Essientes, Ignatius Reilly, Zoyd Wheeler, and all the couch potatoes of our era.
Posted by Murr at 6:46 PM

Excellent analysis. I read Oblomov a couple of years ago. I forget how many pages pass before our hero even gets out of bed. The Beckett comparison is astute.