"Notes from the House of the Dead" Dostoevsky 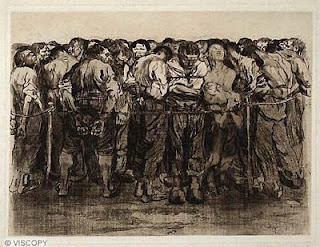 The impression made by reality is always more powerful than that made by a mere story.

Here was a peculiar world, not like anything else; here were its own peculiar laws, its own dress, its own manners and customs, and a living house of death, a life as nowhere else and a people set apart.

Even though I looked at everything with keen and avid attention, I could not discern much of what lay under my very nose.

Between January 1850 and February 1854 Dostoevsky was a political prisoner in a penal colony in the Siberian town of Omsk. This remarkable book appears to be his record of his experience. However, all is not what it seems. The book is not a simple record of Dostoevsky’s experiences, but something much more subtle and finely wrought.

Published in 1860 during a brief thaw in the strict censorship of the time, the book at first positions itself as a novel, with an elaborate editorial framing device designed to mollify the censor and other critics. The work is presented as a manuscript left among the papers of a former prisoner. Behind the ‘I’ of Alexander Petrovich Goryanchikov, imprisoned for 10 years for murdering his wife, hides the ‘I’ of Dostoevsky, imprisoned for 4 years for a political crime. This initial narrative masking sets up a certain freedom, allowing Dostoevsky to describe objectively and in detail the life of the prison without making it appear as a political act, or an overt attack on the system itself. The novelistic mask soon slips, however, as it emerges that, unlike a novel, there is no plot, no ‘setting’ and no ‘characters’.

The autobiographical and documentary now come to the fore. The writing is characterised by a clinical objectivity. Phrases such as It is a fact that…. abound. We are given detailed descriptions of the social structure of the prison, the economics of the prison, the squalid living conditions, the daily routine, the excessive brutality of the punishments, the gruelling labour, the utterly relentless and crushing boredom, the lice-ridden latrine-stinking overcrowding. Like modern oral historiography, we are given some of the convict’s stories, from their own mouths, with little or no ‘authorial’ interference or comment. The emphasis is on facts. The (melo)drama and theatricality of Dostoevsky’s previous work is entirely absent, even in the stories told by the convicts of their crimes, and in the descriptions of the punishments meted out to them for infractions of prison regulations, and the outbreaks of sudden violence that characterise prison life: all potential sites for ‘writing-up’. Everything is understated and downplayed, and left to speak for itself. There is none of the angry hectoring of Dickens, for example, or the biting sarcasm of Hugo, those other great reforming zealots of the 19th century who were such huge influences on early Dostoevsky.

At the same time, the book addresses a number of philosophical problems:
1. the inequality of punishment for the same crime
2. the gap between appearance and reality and how to interpret reality
3. the effect on the character of judicial brutality, both on those who administer it, and those who suffer under it
4. the nature of freedom
5. the nature of philanthropy
6. the importance of hope

These themes run like threads throughout the narrative but appear with more frequency and intensity towards the end of the second half, where we can understand them more because we have, like the narrator, spent more time in the prison, and are able to understand it better.

The book therefore shifts constantly between different genres: novelistic, documentary, philosophical meditation, factual, social tract, autobiography. The ‘I’ of the autobiographical episodes is not the same as the I of the philosophical sections, although it appears so. These have been arrived at later, upon reflection of his memories of his experiences. Dostoevsky made extensive use of notebooks during his prison stay, jotting down phrases heard in prison, his impressions and so on. He could simply have published these as his record of prison life. But he chose to work them into something more complex and subtle. So that what appears to be objective and documentary is in fact highly subjective and personal, highly artistic, highly political, but minimising the political risk. Dostoevsky attempts to alert us to the fact that all is not what it seems in the book, by calling the first three chapters (after the introduction): ‘First Impressions 1, 2 and 3’ and by meditating frequently on the gap between appearance and reality.

From a sociological perspective, one of the most interesting things about the book is Dostoevsky’s description of the homosexual. Of course, in an all male environment such as a prison, homosexual activity is a given. This extremely taboo subject (in the context of the 1860s) is handled with an enormous amount of subtlety and skill, and can be easily missed by a naïve or unknowing reader. The topic is dealt with through the character of Sirotkin who is introduced into the narrative immediately after a discussion of how the prisoners are able to pay for sexual relations with women from outside the prison with the collusion of the guards and the exchange of money; and who is described thus: My curiosity was particularly aroused (aroused?) by a certain young convict […] In some respects he was a rather mysterious creature. I was struck above all by his beautiful face…quiet and unassuming…his eyes were blue, his features regular, his face soft and clear complexioned…Change the gender of the pronouns and the description could be of one of Dostoevsky’s heroines. Sirotkin has no trade (the narrator has been very keen to stress early on that everyone in the prison has some sort of trade), but is given gifts by the other prisoners for reasons which are glaringly unspecified. He and his companions are often made fun of, again for glaringly unspecified reasons. Sirotkin is a former soldier who hated the army because ‘Everyone was so heartless and there was nowhere to have a decent cry.’ The narrator finishes his description with this enigmatic comment: Among his companions, Sirotkin was the only good looking one. As for the others like him, of whom there were perhaps as many as fifteen in our prison, it was a strange experience to watch them… Later, one of the other prisoners is described as being friendly with Sirotkin only when he needed to obtain the latter’s services… Even in the house of the marginal dead, there are even more marginal ghosts. It seems to me that the presence of this taboo subject, and the highly oblique way it is presented, enacts in microcosm the method of the whole book. Unpalatable truths are compellingly presented, nothing is left out, the gaze is unflinching, the details unsparingly selective. And yet, nothing is what it seems.

Reality is infinitely various when compared to the deductions of abstract thought, even those that are most cunning, and it will not tolerate rigid, hard-and-fast distinctions. Reality strives for diversification.

Tyranny is a habit; it is able to and does develop finally into a disease. I submit that habit may coarsen and stupefy the very best of men to the level of brutes

There is in the Russian character so much down to earth sobriety, so much inner mockery primarily directed at the self…

It is time we stopped complaining apathetically about our milieu, claiming that it has devoured us. It is admittedly true that it does indeed devour a great many things in us, but not everything.

Nothing in Dostoevsky’s previous career even hints at the kind of subject matter and tone he was to achieve in this book, and for this reader it stands as one of the most personal and one of the greatest achievements in his cannon.
Posted by Murr at 3:58 PM

Exellent synopsis, Murr. I thought it a masterpiece of prose.

I wonder if you could comment on the broader perspective of this book in the canon of 'holocaust' literature - for example the expression of loss of self as shown in Levi's work, or the fictional representation of mental fragmentation and dissolution portrayed in 'The Blnding Absence of Light'?

Thank you Kiwidoc.
I'm not familiar with The Blinding Absence of Light, so can't comment on that. However, Primo Levi did spring to mind constantly while reading H of D, particularly, as you say, in the threat to the sense of self. I also see this in Oscar Wilde prison's writings, and in Genet, who saw it less as a threat than an opportunity to experiment with the creation of alternative selves.

I'm wondering now whether Dostoevsky's book didn't give birth to the whole prison genre. I know of no other previous prison book comparable to it in its scope and power. The only other 19th century prison book which comes near to it is Marcus Clarke's For the Term of his Natural Life (1874/5).

Well, I don't really suppose this is likely to have effect.