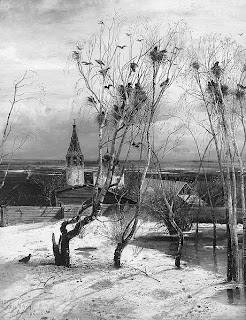 And for a long time to come am I destined by the mysterious powers to walk hand in hand with my strange heroes, viewing life in all its immensity as it rushes past me, viewing it through laughter seen by the world, and tears unseen and unknown by it…

Chichikov, a portly, middle-aged former civil servant, travels around the Russian countryside with his driver and footman buying up the names of dead peasants so that he can mortgage them later and thus improve his position, fraudulently, in society. This basic premise is less a plot than an excuse to present to the reader the real matter of the story: encounters with humorous and eccentric landowners. The novel is a picaresque, a ludic compendium of irrelevant but highly rewarding and entertaining detail and digression.

Perhaps the strangest thing about this strange book is its structure, and the huge disparity between parts one and the incomplete part two. From the beginning we are immediately plunged into the story with Chichikov’s arrival in the town of N. We see how he prepares the ground for his business, we see his encounters with local landowners, we even see how he occupies himself alone in his room, but we have no idea who he is or what motivates him. His backstory is only presented in the last chapter of part 1, and it’s only then that we learn about his scheme, his past life and his ambitions. This structure creates an interpretative question for the reader all through the first half: who is Chichikov? This question in the mind of the reader is cleverly mirrored in the same question asked by the dignitaries of the town of N, once they realise that Chichikov’s business is not so honest as it seems: they realise that this man, whom they have made much of, is an unknown quantity. Who is Chichikov: is he a high government official travelling incognito, as in The Government Inspector? Is he Captain Kopeikin? Is he a forger of government notes? Is he the devil, as James Wood bizarrely suggests? Gogol himself seems to be laughing at this kind of metaphysical interpretation by having one of the characters assert that Chichikov is really Napoleon, escaped from St Helena, and roaming Russia in disguise. Which is more farfetched, more absurd: the devil or Napoleon?

And who indeed is Gogol? "No one can imagine what Gogol was really like," wrote Akhmatova. "Everything about him is incomprehensible from beginning to end. The individual features refuse to add up to anything." He is a comic genius, a writer whose characters and situations have life of their own, whose prose buzzes and fizzes with uncontrolled detail, a hilarious fabulist who is unable to control his tongue […]because there were so many interesting details bobbing up of their own accord, that it was quite impossible to give them up as the narrator remarks of the inveterate tale-spinner Nozdryov, in a miniature self-portrait of the artist at work. He is a wonder boy genius, whose Ukranian tales made him the toast of Petersburg at the age of 24, and whose Petersburg tales influenced everyone from Dostoevsky, Kafka and Bulgakov to the magic realists, the surrealists and those ur-fabulists: Freudian psychoanalysts. He was a Russian nationalist who spent most of his adult life in European exile; he was a lonely homosexual tormented by self-hatred, a delusional messiah, who convinced himself that his great work would be the answer to all of Russia’s problems. He was the lover and perpetrator of practical jokes, the fraudster who wangled himself a position as Professor of History at St Petersburg University at the age of 25(!). And yet he was also an arch conservative, stern moralist and a sweaty Christian fanatic who disowned his early works, burnt his masterpiece and then starved himself to death at the age of 43. Gogol remains ungraspable, hemmed about by deception, temptation and failed intentions; a would-be seer who was always at the unwilling mercy of his colossal verbal gift, a gift that he relished, and at the same time abhorred.

Many errors have been made in the world which today it seems even a child would not have made, the narrator says in the penultimate chapter of Part 1. These errors he attributes to man’s propensity to avoid the straight and narrow road leading to the magnificent building of the truth even when it lies clear before him, and to voluntarily choose instead the path leading to impassable out-of-the-way places, to run after will-o’-the-wisps, to throw a blinding mist over each other’s eyes. Chichikov says more or less the same thing when he is thrown in prison at the end of part 2: I was dishonest only when I saw that I could not get anywhere by following the straight path, and that the crooked path led more directly to the goal. (Incidentally, this may be a prefiguring of Dostoevsky’s philosophy of the irrational: Dostoevsky learnt much from Gogol.) The source of this temptation to stray from the truth, to choose the interesting digression over the straightforward exposition, lies within language itself. It is in the very nature of language to deceive because language is inseparable from fiction. For Gogol, (in particular the Russian) language is a kind of force of nature, a mystery which he only thinks he controls: there is not a word that is so sweeping, so vivid, none that bursts from the very heart, that bubbles and is tremulous with life, as a neatly uttered Russian word. Language is tremulous with life of its own. Again and again in Part 1 the narrator testifies to the independent life of his linguistic creations: Let us see what Chichikov is doing! …I’m terribly sorry! I believe a rather colloquial expression has escaped from the lips of my hero. But what’s to be done about it?...I’m afraid we are talking too loudly, forgetting that our hero, who was asleep while we have been telling the story of his life, has awakened…the author must not quarrel with his hero under any circumstances. They still have a long way to go….No words can express the author’s gratitude, for say what you like, if this idea had not occurred to Chichikov, this epic poem would never have seen the light of day.

In Dead Souls part of the way language shows its own tremulous life lies in the way signifiers become freed from the signified and take on an existence of their own: the word ‘millionaire’ was to blame, not the millionaire himself, but just the word alone… Signifiers create a signified, which no longer exist. When Chichikov reads the lists containing the names of the deceased peasants he has purchased he was seized by a strange feeling…it seemed as if the peasants had been alive only yesterday. The names of the peasants stand in metonymic relation to the lives of the peasants, the names create the imaginary lives of the peasants: Stephan Probka, here is the tall man of great strength who might have made a fine guardsman... It’s significant in this scene, that even here, Gogol/Chichikov cannot resist the fantastic digression as he tells the story of the peasant who belonged to the name Maxim Telyatinkov, who started a cobbler’s business and cheated his customers; or the story of the peasant who belonged to the name Popov, who is interrogated by a policeman and who gives bald lies as his answers and ends up in prison: these digressions are fictions about fictions (the cheat, the lies) taking place within a fiction whose origin stems from marks on a page: the words in Dead Souls, the names on the list… Chichikov has never met these peasants, these imaginings of his are not acts of memory, they are acts of fiction, of tale spinning, of falsehood, spun by the too-potent power of the signifier, and which always get the teller in trouble: Popov ends up in jail, Chichikov flees from N, Gogol starves himself to death in a supreme act of disavowal.

Part 1, 8 years in the writing, was published in 1842, whereupon Gogol left for Europe, and began writing the second part, of a projected three part work. However, his confidence in himself began to wane, and his relationship to his gift changed. At every step I stopped myself with questions: Why? What is it all for? What should such a scene and such a character express? I saw clearly that I could no longer write without a clearly defined plan he wrote in his Author’s Confession. Everywhere in part 2 is evidence of this doubt in his ability and forcing of content to fit a predetermined theme. Instead of the tremulous life, the living characters who astonish and delight us by the truthfulness of conception and description; instead of the luminous prose and organic unity of structure of the first part, the second part is lame in way which has nothing to do with its incompleteness. The landowners Chichikov meets in Part 2 have no clearly defined characteristics to set them apart from each other; they become mere mouthpieces for authorial rants against the corruption of the Russian soul by European influences. Even the characters themselves seem to be aware of this. Kostanjoglo remarks on his neighbour Koshkaryov: He is necessary because the stupidities of all our clever fellows are caricatured and reflected in him, and therefore become more transparent to us….: In place of the real steppe landscape and endless roads of the first part, we have an idealised pastoral view which all too obviously and nostalgically represents itself as a mythical landscape of an agrarian paradise. The hilarious digressions and details which characterise part 1 are absent here; and passing secondary figures appear because they represent something other than themselves: the clerk in the final chapter, for example, is one of the few officials who did their work con amore; without being anxious to make a profit out of his job appears as a symbol of the ‘good official’, rather than as a character with individuality.

Only one thing sticks out in Part 2, and that is the prescience with which Gogol describes a future Soviet bureaucracy in the description of Koshkaryov’s method of managing his estate: your request will go to the Office of Reports and Petitions. Having entered it into a book, the Office will send it over to me. I will send it to the Committee of Rural Affairs and from there, after all the necessary inquiries have been made, it will be sent on to…
Posted by Murr at 8:55 PM