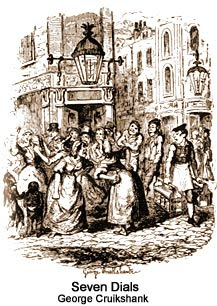 George Eliot’s main objection to Dickens, apart from (what she perceived as) his vulgarity and melodrama, was his lack of interiority. In this she is both right and wrong. Dickens’s whole gift is his exteriority. He can sum up in a sentence a whole character that would take Eliot three chapters to describe. However, where she is wrong is in considering that this is a weakness. Eliot surprisingly makes two cardinal critical errors here, not only in judging a work of art, but in judging it in terms other than those provided by itself.

Eliot and Dickens stand at two polar extremes of literature: exteriority and interiority, both of which are based on different conceptions of character. For Eliot, character is the mind communing with itself, its impression of the world and reflections on it. It is the mind of someone raised in the country, in the relative isolation of family members, in the company of books. Locke.

Dickens, on the other hand, has a completely different conception of character. Character is what is revealed in our relations with other people and in our actions. It’s something we observe in others and which others observe in us. It is urban, the individual reacting to the constant stimulation of the other, the mind of someone who has forgotten what it is like to be alone, of someone constantly living in very close proximity to strangers, where privacy is a luxury. Marx.

In the Sketches, Dickens announces himself as this kind of writer; he announces his conception of character by providing sketches of London ‘everyday life and everyday people’, giving us just as much of them as is necessary for us to recognize ourselves. Here are the Lord Mayor and a crony enjoying dinner, for example: The Lord Mayor threw himself back in his chair in a state of frantic delight at his own joke; every vein in Mr. Hobbler’s countenance was swollen with laughter, partly at the Lord Mayor’s facetiousness, but more at his own…

Dickens doesn’t aim for interiority. He doesn’t do it not because he can’t, but because it’s not his thing. He is an observer, a sketcher, a cartoonist. This is not to denigrate his gift, but to recognize it for what it is. It’s a purity of line that expresses everything in one swift movement with utter confidence and economy. It’s not chiaroscuro.

Historical hindsight has made it difficult to appreciate the radical impact of the book. We need an imaginative leap to appreciate the sheer novelty of Dickens’s voice, a voice inextricably linked to the new phenomenon of the megalopolis.
Reading the sketches now we appreciate them for the glimpses of the great Victorian city they afford us, nostalgic, vanished and all but forgotten. For Dickens’s readers, however, this was not nostalgia, but a description of life in the massive metropolis as they knew it: immediate and new. Foreign visitors to London were always overwhelmed by its vastness, by its teeming crowds. The inhabitants of this vast anthill must have also felt the same way from time to time. It was all so new, and growing daily with fresh arrivals from the country flocking in for work. Never before in literature had this urban scene been described. Until now, the urban character had not been visible to himself in the literature of vicarage gardens, unmarried daughters in cottages, rakes and libertines of the aristocracy, castaways and adventurers. Here for the first time was the urban environment as it was experienced: anonymous, teeming with characters, disorientating. Frequently, the life of the street actually invades the text: There is a hackney coach stand under the very window at which we are writing…. …cotton handkerchiefs unlike any, one ever saw before, with the exception of those on the backs of the three young ladies without bonnets who passed us just now.

In the Sketches, ‘Boz’ holds up a mirror to the everyday urban experience and allows the inhabitants of the city to see themselves as they negotiate the spaces and objects of the urban environment.
Here is his advice on how to get into the newfangled cabs:
The getting into a cab is a pretty and graceful process, which when well performed, is essentially melodramatic.(…) one bound and you are on the first step; turn your body lightly round to the right and you are on the second; bend gracefully beneath the reins working round to the left at the same time, and you are in the cab. There is no difficulty in finding a seat, the apron knocks you comfortably into it at once and off you go.Those reins, you see, how they must have puzzled people at first. And now how to get out:
We have studied the subject a great deal and we think the best way is to throw yourself out, and trust to chance for alighting on your feet.
How they must have laughed at the newness of it, at the recognition of themselves.

The newness of this urban voice also includes Dickens’s enthusiastic embracing of new forms of production: the urban mass-produced newspaper and of course the illustrations by Cruikshank. This was a genuinely popular art form that the urban masses hungered for as a novelty at first, and then as an established cultural phenomenon.

I think also early Victorian people experienced the anonymity of the city crowds as a kind of liberation in which new forms of character could be tried out. So often in Dickens there is the feeling that characters are performatory. The gesture, the turn of speech, the idiosyncrasy of dress reveal a conception of character shared by Dickens and his readers: Look at me: I exist in the eyes of others, in the eyes of fleeting strangers. In the country town or village it’s not possible to reinvent oneself as every one knows you. In the new city, however, no-one knows you and new things can be tried out. Dickens is full of characters who are on the make: Guppy, Miss Miggs, Heep, Mr Moddle, Bailey, and they are all intensely performative.

In the Sketches the voice is fresh, jaunty, witty, sympathetic and unmarred as yet by the corrupting influence of Carlyle, who came to exercise such a malign influence over Dickens’s prose towards the middle of his career.
Posted by Murr at 3:49 PM

Fantastic review. I really enjoyed reading it and will be thinking about it for a considerable while.