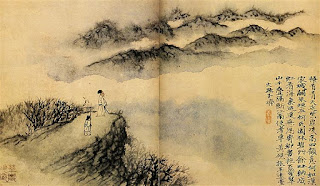 We are looking at a painting by the great Ming Dynasty landscape artist and Chan Master Shi Tao: a scholar (with attendant) on a promontory gazing out over a sea of mist to ridges of hazy mountains in the distance. On the right of the picture is a poem by Shi Tao’s friend and associate, the poet Huang Yanlu, in Shi Tao’s calligraphy. The poem describes a ruined city: images of razed walls, deserted orchards and abandoned houses, none of which can be seen in the picture. From this disjunct between painting and poem, David Hinton begins his investigation of the spiritual roots of Chinese landscape painting, calligraphy and poetry.

Hinton sees the white space and multiple perspectives of Chinese landscape painting as a visual expression of the perpetual movement between Absence and Presence which, according to the first verse of the Dao De Jing, gives rise to the ten thousand things of mental and material phenomena. He reveals how this tension operates within Chinese characters – strokes organized around a void, within the sweeping gestures of calligraphy - in which a balance is sought between the being-in-the-moment of the movement of the brush and the residue of that movement/moment in the ink stroke left on the page. He also shows how classical Chinese grammar itself – with its absence of pronouns, verb tenses and deliberate ambiguity of syntax and word class - is also a manifestation of this dynamic interchange.

Along the way he makes some fascinating observations about the differences between Western languages and Chinese. Western languages impose a barrier between the things of the world and descriptions of them; at the same time as they describe the world, they try to transcend it. The relationship between words and things is arbitrary and mimetic, as Saussure and the Structuralists noted. In our creation myth, language comes before the world and the world is somehow a creation of language: And God said: ‘Let there be light’ and there was light. In the beginning was the Word, and so on. Chinese creation myths, on the other hand, begin with the hexagrams of the Yi Jing which represent every possible combination of ying and yang, and which rather than describe the particulars of reality, embody the deeper forces and processes of reality, Hinton writes. The clear division into noun and verb of Western languages imposes a fixity on the world that blinds us to its real nature as a process of perpetual impermanence. Whereas Chinese, in which words can be both neither noun or verb and both noun and verb, retains that fluidity and that awareness of the underlying processes of change.

Moreover, Chinese poetry, calligraphy and painting represent an attempt on the part of the practitioner to get behind the false dualities of Absence and Presence, ying and yang, observer and world, language and reality, to the fundamental essence that lies behind them, represented by the mysterious character 玄 xuan,  ‘dark enigma’ which also appears in the first verse of the Dao De Jing. Out of this dark enigma everything rises, and back into it everything sinks in a perpetual movement of becoming and passing. This is related to the Chan meditation practice of observing how thoughts come and go and in the process, stilling the everyday mind and letting the true mind 本心ben xin come forth. This true mind is our true nature, the true nature of reality, and which exists before all thoughts begin, and which precedes and underlies all duality, the true mind obscured by the fleeting dust of delusion, as the 5th century First Chan Patriarch Bodhidharma puts it in the Essence of Mahayana.

The book is fascinating, with a wealth of ideas to contemplate about language, translation issues, Chinese art and culture, the relationship between Daoism and Chan, the evolution of the Chinese writing system and the meaning of individual characters, the practice of calligraphy, dragons, the tumultuous history of the transition between Ming and Qing, the biography of Shi Tao. Along the way, Hinton offers us different, provisional translations of the poem in the painting, based on his and our evolving understanding of the deeper issues involved in bridging two widely differing cultures. It’s rather like being part of a translators workshop. What lifts the book above mere cultural commentary, however, is Hinton’s brave decision to use a prose style that reflects as nearly as possible what happens in Chan meditation. It’s one thing to be told that a painting and poem is a meditative practice, and quite another to become a part of that process itself, to be drawn in to the process by means of a style which is circular, elliptic, recursive, and poetic rather than academic, and which never tries to impose (a delusory) clarity of expression onto something that is ultimately inexpressible by means of language and that must be experienced personally. Many readers might be put off by this indirectness, but a reader who is also a meditator will instantly grasp what Hinton is trying to do.

The book is lavishly and beautifully produced by Shambhala, with a full color pull-out of the painting under discussion, 9 more full color plates of some of the greatest paintings in the genre, and copious black and white illustrations of details from those paintings, and examples of calligraphy. A singular and unclassifiable masterpiece by the greatest translator of Chinese poetry and philosophy of our age.
Posted by Murr at 4:07 PM