"The House of Niccolo" Dorothy Dunnett 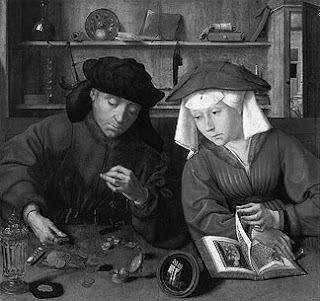 The Money Lender And His Wife by the 15th Century Flemish painter Quentin Massys shows the money lender and his wife seated at a green covered table. Although both are facing the viewer, both are intent on what the man is doing: he has a small set of hand scales and he is weighing specie. On the table in front of him is a pile of coins, a glass vase, a small velvet bag with pearls nestling on it; in front of the wife is an illustrated book, and she is turning the page. They are both richly dressed, he in sombre brown trimmed with fur, she in deep red trimmed with grey fur, both hatted. Behind them is a dresser with various objects on the shelves: papers, books, a candle stick, another set of scales, a silver dish, an orange. Between them on the table, is a small convex mirror, reflecting, in the position of the viewer, an open window. Through the open window can be seen a building and a tree, a glimpse of a street perhaps in Bruges, Ghent or another of the rich Flemish towns of the period. Unlike the endless boring parades of Madonnas and Childs, Crucifixions and Pietas of the Southern Renaissance artists, the Northern Renaissance artists offer us real people represented in the here and now of their own times.

This is what Dorothy Dunnett’s House of Niccolo series offers us too, an entry into the world of the late 15 century, presented in all the glowing richness and physicality of a Massys, or a van der Goes, or a van Weyden; with the food, the pewter cups and candian wine, the sumptuous clothes, the woodsmoke-filled freezing halls, the pissstinking dye vats, the canals and bridges and gates of the towns, the armour, the pageants, jousts, feasts and plagues, the high politics, and low scheming of bankers, burghers, bishops and high born bastards, Dukes, Kings and Princes, the wars, wounds, living, loving and dying.

Here is a partial list of historical events covered by the series:

The fall of Trebizond, last outpost of the Byzantine empire
The rise of the Ottoman Empire in the black sea
The trade rivalry between Genoa and Venice
The end of the Lusignan dynasty on Cypress
The Wars of the Roses in England,
The marriage of James II of Scotland and Margaret of Denmark
The marriage of Zoe Paleologue and Ivan the Third Grand Duke of Muscovy
The disintegration of the empire of the Golden Horde
The sack of Timbuktu by the Songhai empire
The siege of Famagusta
The collapse of the Duchy of Burgundy

Through all these events the hero of the series, Nicholas van der Poele, steers his remarkable career, first as a Tyl Eulenspeigel-like apprentice in Bruges, then mercenary leader, merchant, banker, pirate adventurer, inventor, maths genius, lover, diviner, political and financial advisor to Dukes and Princes, father and enigmatic friend. He is accompanied on these adventures through early modern Europe and the Levant by his band of friends and colleagues, each of whom has a particular skill: a doctor, a priest, an apothecary, a gunner and metalsmith, a notary, a business manager, a ship master and so on. The running story line is the visceral feud between Niccolo and the St Pol family, and the commercial rivalry between Nicholas’s own company and the mysterious Vatachino firm.

Dunnet is an extraordinary phenomenon. Her novelistic method is to eschew internal psychological narration (of the kind that Eliot and Tolstoy employ), and to focus on the events and actions of the characters, the external view. This creates the incredible pace of the novels, and at the same time keeps the reader alert for what is really going on underneath the surface. Her understanding and presentation of history is thick with the details of ordinary life; she completely understands the complex relationships between politics, religion, economic forces and the inertia of everyday life and how in this period all is seared with trade. She is capable of intensely beautiful descriptive prose, a kind of maidenly raciness in the love scenes, swashbuckling set-pieces of violence, subtle and elusive descriptions of negotiations at high levels. She weaves together her fictional characters and the real personages of history so well that you cannot tell the difference. Her development of character (over 4,300 pages and eight novels) is astonishing in the way she commands the reader’s loyalty, respect and love for the ‘good’ characters, and hatred for the ‘bad’ characters, without sacrificing complexity and insight into how those characters have become what they are. She is also a witty commentator on the parameters and conventions of the genre without introducing the kind of jarring anachronisms that mar many writers of historical fiction. Her metaphors are all firmly entrenched in the worldview of the characters (which, according to that most didactic of critics James Wood, is the hallmark of great writing) and there are several very funny jokes. My favourite is the list of the (uncapitalised) names of the castles owned by Prince Sigismond of the Tyrol: sigmundhelm, sigmundhof, sigmundfried sigmundfreud…

Like the great Dumas, she is capable of invoking in a sophisticated (possibly jaded) adult reader the kind of feverish, intoxicated, under-the-bedclothes-with-a-torch kind of reading last experienced in childhood.
Posted by Murr at 11:34 AM

Well said. Your characterization of Dunnett's talents could not possibly be more accurate. I am one such fevered reader, having gone through the Niccolo series three times or more (I've lost count).

Gold Guide for World of Warcraft said...
This comment has been removed by a blog administrator.
5:16 AM

WOW GOLD said...
This comment has been removed by a blog administrator.
6:41 PM

BUY WOW GOLD said...
This comment has been removed by a blog administrator.
6:56 PM